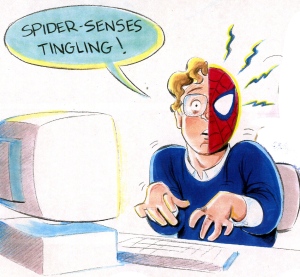 Rob David has an overactive imagination—a potential liability he has successfully turned to his advantage during a career in storytelling.  After graduating from Columbia University with a B.A. in Philosophy, he soon discovered that companies just aren’t looking to hire philosophers.  So he quickly switched to cartoons.  Rob scored his first writing gig for Disney, penning scripts for Disney’s PB&J Otter and, later, for the Annie Award nominated series Stanley and Jojo’s Circus.  Several of his original  teleplays for Stanley were adapted and published by Disney Press as children’s books.

When not writing about himself in the third person, Rob throws on his trusty fedora and trench coat and moonlights as a soft-boiled crime detective.

The writer by night